The consultation is now completed.  Many thanks to all the many people who took part. The Steering Committee have analysed the feedback and held discussions with interested parties in order to amend the Draft Plan.  The results were brought to the Forum Annual General Meeting on October 2nd. 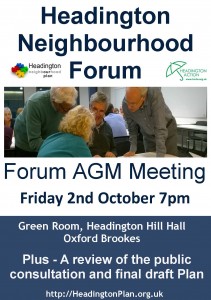 The Headington Neighbourhood Forum’s Draft Plan  was published on Sunday 31 May 2015.  It can be viewed and discussed at the Headington Hub (125 London Road) on the next six Saturdays, 10 am to 4 pm (until July 11th).

The Character Assessments of Headington done in conjunction with the Draft Plan can be found here.

All aspects of the draft plan are up for discussion on on any of these days but there will be a focus on one particular area of the draft plan, as follows:
∗  6th June  Amenities & Green Spaces
∗ 13th June Character & Identity
∗ 20th June Housing
∗ 27th June Education
∗ 4th July    Business & Retail
∗ 11th July  Transport