Information about how a Community Council is set up is available here.

Headington Neighbourhood Forum’s Plan was made (i.e. approved) on 20th July 2017 and its Planning Policies are now being used, along with the City’s planning policies, to determine planning applications within the Plan’s area. In addition to the Planning Policies, the Plan included several Community Policies, the last of which is concerned with the formation of a successor to the Forum. That Policy, FC1, states:

Therefore, the Steering Committee, with the help of Headington Action, applied to the City Council to undertake the required first step to establish a Community Council, namely a Governance Review.

On 13th February 2019 the City Council unanimously agreed to carry out a review, which is to take place from July 8th 2019 to August 23rd 2019. This is essentially a consultation exercise to confirm that a Community Council would be suitable for Headington. If the outcome of the governance review is favourable elections for the Council would be held in May 2020.  The area will need to be divided into a small number of community/parish wards, probably about four, with a small number of community councillors elected from each ward, possibly four per ward.  The actual warding and number of councillors is to be determined by the City Council, with input from the Forum.

The benefits of a Community Council include a statutory right to be consulted on planning applications with greater influence on the future development of Headington and it would also protect and implement the Neighbourhood Plan and strengthen the identity of Headington. It would raise money for local projects through a small additional charge on the annual Council tax and it would provide a voice for Headington and encourage local people to participate in decisions about our future.

Since the Headington Community Council area is large the Forum does not expect the additional charge to be higher than the average of these charges shown above, which is about £23 (Band D) and indeed it may be lower.

We do hope members of the Forum will take part in the consultation exercise. Details will be set out in a City Council pamphlet which will be delivered to all households in Headington in July 2019.  The Forum’s own leaflet setting out the benefits will be distributed during July and August.

Further information can be found on the Community Council tab and here. 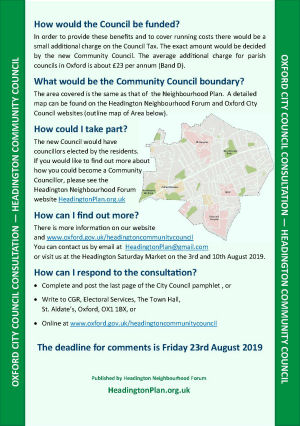