An application for CIL funding has been received to fund the design stage of the Regeneration of Headington Centre project. This will include the preparation of a detailed plan by a specialist consultant for the delivery of the Vision for Headington Centre. The plan will comprise a series of deliverable projects with sufficient detail for ready implementation. The preparation of the plan will be informed by a consultation exercise involving local residents and key stakeholders. The project is supported by the Oxford City Council’s Regeneration and Economy Team who have provided input to the preparation of the project brief.

Entertainments, food, crafts, refreshments and the stalls of the Saturday Market in the centre of Headington. Later in Bury Knowle Park.

SATURDAY 1st JUNE
In Headington Shopping Centre
10am-3pm: Entertainments, food, crafts, refreshments and the stalls of the Saturday Market in the centre of Headington.

To let you know that the HA response has now been forwarded with all the other responses to the Secretary of State, for independent examination. We have requested to be represented at the examination in public to be held later this year. See our response as submitted to the SoS here.

Forum members and supporters are distributing an explanatory leaflet to residents, to complement the pamphlet sent out by post by the City Council. Read the leaflet below or read a pdf version here.

Further information about a Community Council can be found here. 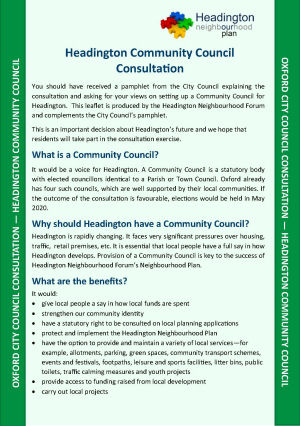 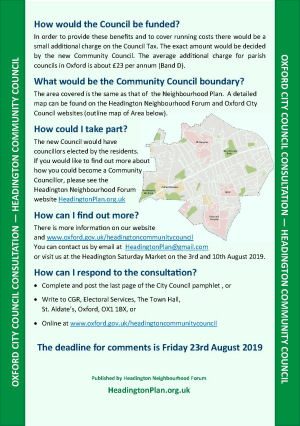 At its AGM in March 2018 Headington Neighbourhood Forum (HNF) agreed that the activity of the steering committee would continue in its steering and monitoring role while Headington Action (HA) would take on the responsibility of implementing projects and, where appropriate, applying for Community Infrastructure Levy (CIL) funds from the City Council to assist implementation.  CIL monies may only be spent on infrastructure projects that reflect local priorities and are based on sound evidence. Such projects may include the provision, improvement, replacement, operation or maintenance of infrastructure, or anything else that is concerned with addressing demands that development places on an area.

Where a Neighbourhood Plan is in place the Plan’s area is entitled 25% of the CIL (15% if no Plan in place), which for Headington equates to about £60,000. A process for approving applications for CIL funding for projects in Headington has been agreed with City Council officers and a small number of CIL fundable projects have been prioritised by HNF/HA.

The first application for approximately £4,000 to extend the Mid-Winter Lights to a further two pavement trees in Headington Centre has now been approved.

An application is in the pipeline from the Friends of Headington Hill Park to construct some gates at the bottom of the park and also to improve the pedestrian access from Oxford Brookes into the park at the top.  HA have already funded a tree trail with noticeboards for the park and this will be in place shortly.

The HNF/HA Greening of Headington project group has had a scoping meeting and now seek some volunteers and a project manager. The hanging baskets could be the first scheme to be tackled.

HA’s Loneliness and the Isolated in Headington project has appointed a project manager.

Voluteers – HNF/HA urgently need people to help implement all these projects.  If you would like to help in any way, large or small, please contact either HNF  or HA
.

Fifteen places have been nominated this year to be added to Oxford’s Heritage Asset Register.  Of these, six are in the Headington Neighbourhood Plan Area.  They will be considered at the East Area Planning Committee on July 4th 2018.  The committee paper recommending approval can be viewed here.

If you have suggestions for additions in the next year’s round of nominations, please contact Headington Neighbourhood Forum or Headington Action.

Planning permission was refused yesterday (19 June 2018) for the third application for the site of the former Quarry Gate pub as it “fails to relate to the strong sense of character of the surrounding area”: Headington Neighbourhood Plan cited. See the Planning Application and Decision.